To ORDER any books below, CLICK on the picture or the title.
#1 The Woman's Encyclopedia of Myths and Secrets
Comprehensive sourcebook focuses on mythology anthropology, religion, and sexuality to uncover precisely what other encyclopedias leave out or misrepresent. The Woman's Encyclopedia presents the fascinating stories behind word origins, legends, superstitions, and customs.

#2 The Woman's Dictionary of Symbols and Sacred Objects
Comprehensive sourcebook focuses on mythology anthropology, religion, and sexuality to uncover precisely what other encyclopedias leave out or misrepresent. The Woman's Encyclopedia presents the fascinating stories behind word origins, legends, superstitions, and customs.

#5 Four Arguments for the Elimination of Television
This book is the first ever to advocate that the medium is not reformable. Its problems are inherent in the technology itself and are so dangerous — to personal health and sanity, to the environment, and to democratic processes — that TV ought to be eliminated forever.

#8 Gerald Massey's Lectures
The Historical (Jewish) Jesus and the Mythical (Egyptian) Christ; Paul as a Gnostic Opponent, not the Apostle of Historic Christianity; The Logia of the Lord; or the Pre-Christian Sayings ascribed to Jesus the Christ; Gnostic and Historic Christianity; The Hebrew and other Creations fundamentally explained; The Devil of Darkness; or Evil in the Light of Evolution; Luniolatry; Ancient and Modern; Man in search of his Soul, during Fifty Thousand Years, and how he found it; The Seven Souls of Man, and their Culmination in the Christ; and The Coming Religion.

#9 Ancient Egypt The Light of the World: Vol. 1 and 2
A WORK OF RECLAMATION AND RESTITUTION IN TWELVE BOOKS Vol. I and 2. It may have been a million years ago The Light was kindled in the Old Dark Land With which the illumined Scrolls are all aglow, That Egypt gave us her mummied hand: This was the secret of that subtle smile Inscrutable upon the Sphinx’s face, Now told from sea to sea, from isle to isle; The revelation of the Old Dark Race and more!

#10 The Natural Genesis (2 Volume Set)
The Natural Genesis is based on Massey's study of hieroglyphic inscriptions, bone-caves, and cuneiform tablets of ancient Egypt. The findings from Massey’s years of dedicated research are carefully documented here and encompass such broad areas as religion and the occult, etomology, astrology, and mythology.

#11 A Book of the Beginnings V1
Containing an attempt to recover and reconstitute the lost origins of the myths and mysteries, types and symbols, religion and language, with Egypt for the mouthpiece and Africa as the birthplace. The significance of this work was not recognized in its own time over 100 years ago.

#12 A Book of the Beginnings V2
Containing an attempt to recover and reconstitute the lost origins of the myths and mysteries, types and symbols, religion and language, with Egypt for the mouthpiece and Africa as the birthplace. The significance of this work was not recognized in its own time over 100 years ago.

#13 Rulers of Evil: Useful Knowledge about Governing Bodies
Rather than pass through the Atlanta Federal Prison Camp gate to serve a sentence for a tax misdemeanor back in 1987, author F. Tupper Saussy chose to become a fugitive in order to freely investigate his adversary — the United States of America. Provocative and utterly compelling, Rulers of Evil analyzes the hundreds of historical clues left by the true leaders of the world. It should be read by anyone desiring to know, definitively, why America works the way it does.

#14 Fire in the Minds of Men: Origins of the Revolutionary Faith
This book traces the origins of a faith. What is new is the belief that a perfect secular order will emerge from forcible overthrow of traditional authority. This inherently implausible idea energized Europe in the nineteenth century, and became the most pronounced ideological export of the West to the rest of the world in the twentieth century.

#16 Journey from Eden
JOURNEY FROM EDEN is a complete history of the sexual customs, creeds, and ceremonies among the people by whom, and about whom, the Bible was written. This fascinating and revealing book goes behind the scenes to present an in-depth, documented account of everything you were not told in Sunday School, and were afraid to ask!

#17 Atlantis: The Eighth Continent
For thousands of years before the beginning of recorded history — the legends tell us — a powerful civilization flourished in the middle of the Atlantic Ocean. This breathtakingly advanced island continent boasted splendid cities, golden temples, crowded seaports from which the far-reaching influence of Atlantis spread to the rest of the world, until its destruction in an overwhelming cataclysm. 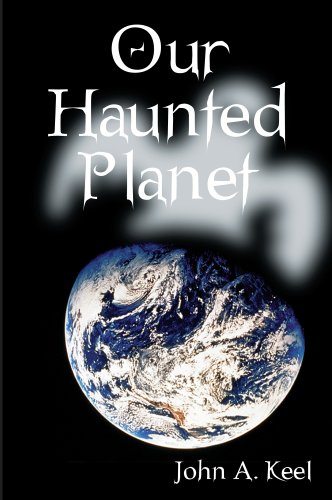 #19 Our Haunted Planet
Foremost Fortean investigator John Keel presents a book filled with evidence of the strange and stories of the unusual. He reveals theories about “ultraterrestrials,” Men In Black, glass mountains, ancient maps, and advanced civilizations predating the caveman. Are we being manipulated for someone’s amusement? For the connoisseur of Fortean phenomena as well as newcomer.

#20 The Complete Guide to Mysterious Beings
A comprehensive encyclopedia of the unexplained, with incredible eyewitness accounts of strange creatures from around the globe. Including: Angles and Demons; The Mothman; Dinosaurs that still roam the earth; Bigfoot, the Abominable Snowman, and other hairy monsters; A real-life land of the giants;The Loch Ness monster, and much more...

#21 ANY Books by John Keel
John Keel is one of the most interesting authors of our age. Any of his writings are worth reading.

#22 None Dare Call It Treason
This book provides the hidden foundations of the United Nations, plus how and why America is the way it is today. This is a MUST READ.

#23 Unholy Alliance: A History of Nazi Involvement with the Occult
A comprehensive, popular history of the occult background and roots of the Nazi movement, showing how the ideas of a vast international network of late 19th- and early 20th-century occult groups influenced Nazi ideology.

#24 World Revolution Or the Plot Against Civilization
In order to follow the universal revolution which we are now passing, we must realize the dual nature of the movement by studying concurrently the outward revolutionary forces of socialism, anarchism, etc., and the hidden power behind them as indicated in the chart found in this work.

#25 Secret Societies and Subversive Movements
This anthology is a thorough introduction to classic literature for those who have not yet experienced these literary masterworks. For those who have known and loved these works in the past, this is an invitation to reunite with old friends in a fresh new format. As an anthology that invites readers to immerse themselves in the masterpieces of the literary giants, it is must-have addition to any library.

#26 The World's Sixteen Crucified Saviors: Or Christianity Before Christ
Known to be a masterpiece of freethought literature. The World's Sixteen Crucified Saviors has been out of print but sought after for many years. Many people are unaware that before Christianity there were 15 other religions that also had a savior who died for their sins, then arose from the dead. Graves gives all the details inside, plus much more found in common like the immaculate conception of the gods, virgin born gods, magi, shepherds and angles who visit the infant saviors, the birthday of the gods being December 25th, plus an explanation as to how Jesus began to be worshipped as a God.

#29 Signs & Symbols of Primordial Man
This work is for anyone interested in secret societies, grand conspiracy theories, and the details of world history with its interconnections between the symbols of humanity's cultures and beliefs — from crosses and swastikas to circles and stars to eyes of Horus and crowns — as a demonstration of the universality of Freemasonry.

#30 The Phoenician Origin of Britons Scots and Anglo Saxons Discovered by Phoenician and Sumerian Inscriptions in Britain by Pre Roman Briton Coins
I think the title says it all! Historical Effects of the Discoveries. With Over One Hundred Illustrations and Maps.

#31 Atlantis; The Antediluvian World
This collection chronicles the fiction and non fiction classics by the greatest writers the world has ever known. The inclusion of both popular as well as overlooked pieces is pivotal to providing a broad and representative collection of classic works.

#32 Lectures on Ancient Philosophy
Complete in itself, this volume originated as a commentary and expansion of Manly P. Hall's masterpiece of symbolic philosophy, The Secret Teachings of All Ages. In Lectures on Ancient Philosophy, Manly P. Hall expands on the philosophical, metaphysical, and cosmological themes introduced in his classic work, The Secret Teachings of All Ages. Hall wrote this volume as a reader's companion to his earlier work, intending it for those wishing to delve more deeply into the esoteric philosophies and ideas that undergird the Secret Teachings.

#33 Old Testament Wisdom
The pageantry and beauty of the Old Testament is presented in this book which provides keys to Bible interpretation. Illustrated with many unusual vignettes from rare manuscripts, the areas discussed include the descent of the Holy Scriptures; Moses, the lawgiver of Israel; the five books of Moses; and the story of creation.

#34 The Mystical Christ: Religion As a Personal Spiritual Experience
This esoteric interpretation of the New Testament presents the devotional side of the Christian faith. The life and ministry of Jesus, the Lord's Prayer, the Beatitudes, the Sermon on the Mount, and the sacred mysteries of the Essenes are explored.

#35 The Wisdom of the Knowing Ones: Gnosticism: The Key to Esoteric Christianity
If any group, which shared in the Christian mystery, possessed the esoteric secrets of the early Church, it was the Gnostics. This order preserved to the end the high ethical and rational standards which confer honor upon a teaching. The Church therefore attacked Gnosticism vigorously and relentlessly, recognizing these mystical philosophers as being the most formidable adversaries to the temporal power of Christian theology.

#36 The Apocalypse Attributed to St. John
An illustrated text which explores the symbolism of The Book of Revelations.

#37 Isis Unveiled (Two Volume Set)
ISIS UNVEILED was H. P. Blavatsky's first major literary effort, a critical response to the growing materialism in both scientific and religious institutions, and a vindication of the ageless quest. Isis ‘is the fruit of a somewhat intimate acquaintance with Eastern adepts and study of their science.’

#38 Symbols, Sex and the Stars
Subtitled An Outline of the Origins of Moon and Sun Worship, Astrology, Sex Symbolism, Mystic Meaning of Numbers, the Cabala, and Many Popular Customs, Myths, Superstitions and Religious Beliefs. Important information not easily found. Mythologist Jordan Maxwell was so impressed he created a three-part video series based on this material and wrote a Preface to the book.

#39 Stellar Theology and Masonic Astronomy
This incredibly detailed book reveals the hidden meanings behind occult signs and symbols from ancient times, found in what should be termed stellar theology, and then carried over into our modern world. Also reveals how Freemasonry is connected to Judaism, Christianity and the Bible.

#40 Occult Theocrasy, Vol. 1
Occult Theocrasy was originally published in 1933 shortly after Edith Starr Miller'ss death. This is volume 1 of 2 and contains a wealth of information about secret societies and occult philosophy.

#41 Occult Theocrasy, Vol. 2
More of the same, completes the set. Occult Theocrasy was originally published in 1933 shortly after Edith Starr Miller's death. This is volume 2 of 2 and contains a wealth of information about secret societies and occult philosophy.